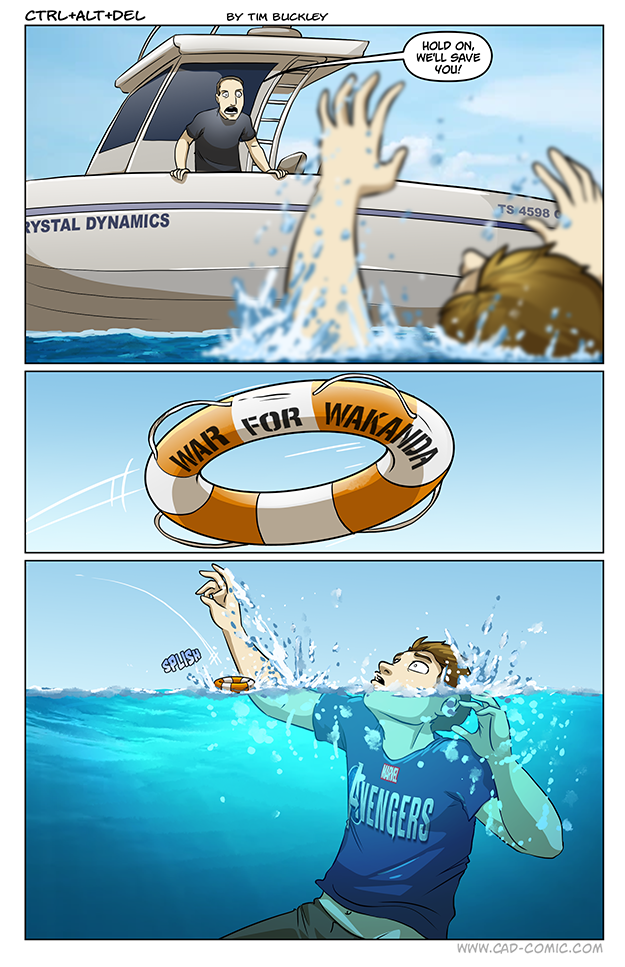 The Avengers’ next content update, War for Wakanda, come out this week, bringing with it the King himself, T’Challa. Story chapters and character combat have always been the game’s strong points, and I’m hearing really positive things about this new expansion. I’m looking forward to diving into it myself.

But though we’ve gotten a few nice updates/mini-campaigns (and this will be our third new playable Avenger), so far the games most fundamental flaws remain unaddressed. I bought the game at launch a year ago, and I have more than gotten my money’s worth of playtime. At this point it costs me nothing to log in every other month for a new event/patch/just to smash stuff as Hulk.

There is nothing to keep me playing, though. No compelling reason to come back daily and grind Hives or bosses. The loot side of things is still a disappointment, and while you can certainly make the argument that it never should have been there, it is there. The game is designed around it, and while they can continue to just add episodic stories/characters and get along fine in that arena (and had they simply done only that from the get-go it would have been a perfectly viable path), leaving the loot/multiplayer side of things unaddressed is a big anchor around the game’s neck.

I love playing as the Avengers; Crystal Dynamics did a fantastic job with the combat. And I want to see tons of new story missions and new Avengers added to the roster. But I keep hoping one of these updates is going to finally figure out an Endgame.

Better to let him go anyway. Let him die with a tiny bit of dignity.

this, either die as hero, or live as villain

This game should have just been a single player only title. No loot, no grind, no “live service” nonsense, and no monetization other than a reasonable price for the additional campaigns as one would expect for DLC. Oh and of course, no Spider-Man excluded from the Xbox and PC versions (Sony has exclusive movie rights to Spider-Man, not exclusive game rights, to pre-empt anyone about to use that terrible excuse again).

They should have made a good single player game, instead they decided to follow industry trends and made another bad live service game.

I honestly wonder what can be done at this point, though. Don’t get me wrong, I understand that there is a lot that can “technically” be done to save the game, plenty of people have plenty of suggestions of course. But, as Tim says in his news post, the game is designed around one of it’s weakest features; the loot system. Plus, the game has a very distinct style to it. Even with the possibility of huge game-changing patches what exactly would they be able to add/take-away that would fundamentally improve the game?

Not played it but your mentions of it on comics remind me of SW:ToR on release, and really now still. Great campaign and solo / levelling experience, but there was no end game, so people swiftly left. Still log into it every now and then but so lost on the story now

I also want this game to be very good in the end,
But this comic is effing hillarious.
*Splish*

I see what you did there.

Yeah, I don’t hold the same hope as you Tim. They would be better off making a sequel game that gets rid of the damn loot aspect of the game.

Christoper Judge, Teal’c and voice of Old Man Kratos, the deepest baritone outside of Kevin Grievoux, is voicing T’Challa. So while still not a buy, this has piqued my interest.

PEOPLE DON’T THRASH WHILE THEY DROWN!