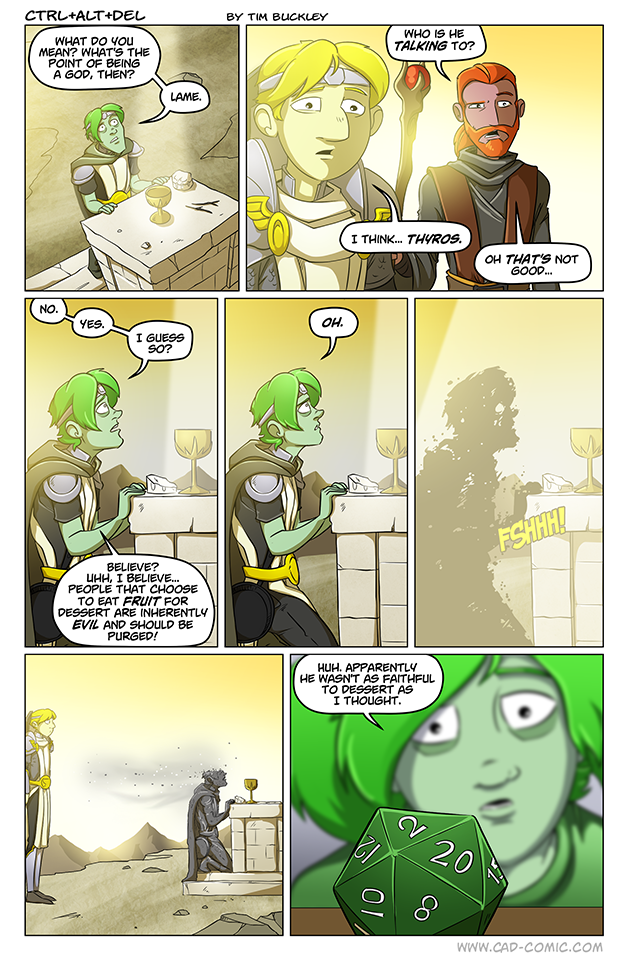 The Campaign: Against The Clock

Ever wanted to play a card game where any of the first 44 Presidents of the United States could beat the shit out of Trump? Well, you’re in luck!

Last year I worked with Killer Robot Games to produce a Ctrl+Alt+Del-themed version of their card battling game Legendary Showdown. It was a fun project, and when they approached me to work on the art for their next game, it sounded like an interesting challenge; definitely outside my regular wheelhouse.

Nearly a hundred cards of new, original art later, Legendary Showdown: Presidential Edition is now available for backing on Kickstarter! It can be played by itself, or combined with any previous iterations of Legendary Showdown (in case you wanted to see if Chef Brian or Abraham Lincoln would win in a fight!)

From the angle of the die it looks like she rolled an 18, I think player 4 made a very bad cleric of Thyros.

It seems a bit non-standard. The 15 showing on the side should have been 14, then the roll would be a 4.

Unless Tim is implying she rolled a 2. He could be mucking with the perspective and angles a bit to get her face in the shot. Its a bit hard to look strait down on a D20 and see the face in the backdrop. While a 2 isnt a critical fail your going to need a high natural skill to make any skill checks with a roll that bad. an 18 on the other hand will frequently pass alot of DC’s even with poor skill. Then agian the dumbass wish she made in the previous page could have made anything… Read more »

I came here to make an observation about what number she rolled and that Tim actually took the time to make it appear correct. I now see that I am not the ony dice nerd here. Awesome.

Yeah I had to fudge the perspective a bit to display the shot I wanted. The intended purpose was a 2, but even if you decide it’s an 18, I believe the audience can make the assumption that it was not enough for her low level character to pass a test given by a god. 🙂

I thought it was a case where the PC achieved success but as with any interaction with deities or devils your words are contractually binding. Four’s PC: “Okay, so, for my first wish, I’ve always wondered what I’d look like if my whole face was covered in Elbow skin..” Thyros: “I’m sorry I don’t grant wishes.” Four’s PC: “What do you mean? What’s the point of being a God then? Thyros: (rambles on about the responsibilities of taking care of mortals and is interupted) Four’s PC: “Lame” Thyros: “Look let’s just get on with this. Do you like cats? Four’s… Read more »

I’m calling it this is now canon.

Really, TechBender. Very conclusive insertion 😀
I especially like the “rambling” part 😀
Are you by accident an DM yourself? 😉

I am absolutely! I started role playing at the age of 13 in the Red Dragon Inn chat rooms of AOL before I knew anything about D20 systems. In high school started playing 3rd edition DND, moved to 3.5 and then tried and hated 4th. Fell in love with Pathfinder and that’s where I started DMing. I also enjoy the storytelling D10 White wolf system World of Darkness. My DM style is more off the cuff, use the players own paranoia as your creation engine kind of thing. Only works when they don’t know you’re doing it though. Having a… Read more »

I only had a few runs of Shadowrun (4) and Earthdawn. I liked both systems, but it would have taken me a few more sessions to get used to the roleplay.
Before that could happened, our groups scattered :/

To be honest, I am totally okay with dice. But Strudel had face weirdness with chin which I noticed just now. Is it because 4 projected her character into the character for a moment?

No, it looks more like a 2.
It looks like neither the 8 nor the 10 would be touching the table, so the 2 would be on top

I think the intent of the displayed angle is to show a roll of 2- a bit of physics defying for the audience’s information. Which would fit in with “is turning to dust”

I want to get that second last panel as a poster… that is awesome.

I don’t understand where people are seeing an 18 here.

the tile just over the edge from the 2 would be an 18 on a standard D20. Normaly if you were looking at the die from the apparent angle in the panel (low to the table looking at the player behidn it) the 18 is probably the one strait up. That said Tim already said he’s bending space a bit to let us look strait down at the 2 and strait sideways at player 4 at the same time.

This character’s name is Strudel, right? Isn’t strudel typically MADE with fruit (apple strudel is the only kind I can think of right now)? Maybe that’s why he got disintegrated – he isn’t even consistent with his own silly beliefs.

Can’t help feeling this explains why no one has succeed this quest before.

Also why there aren’t a pile of bodies around the chalice.

Because there are no bodies left, just ash…

At least Thyros is being a clean god by turning the bodies of those he smites into ash.

I would like too think that for half a second, his face did look like elbow skin.

I have two standard d20s and one special one XD

But he had a pan strapped to his belt! According to PUBG, it should protect him against anything! 😉

Where is the panel where the DM asks, “Are you sure?”

The DM is someone who had one of the character’s father killed by butterfly. You actually expect mercy?

It seems it hardly matters what she rolled at ALL, because the temp character was fated to die from the beginning so that she wouldn’t have TWO characters to run after they saved her original one. Sounds like a good way to go to me.