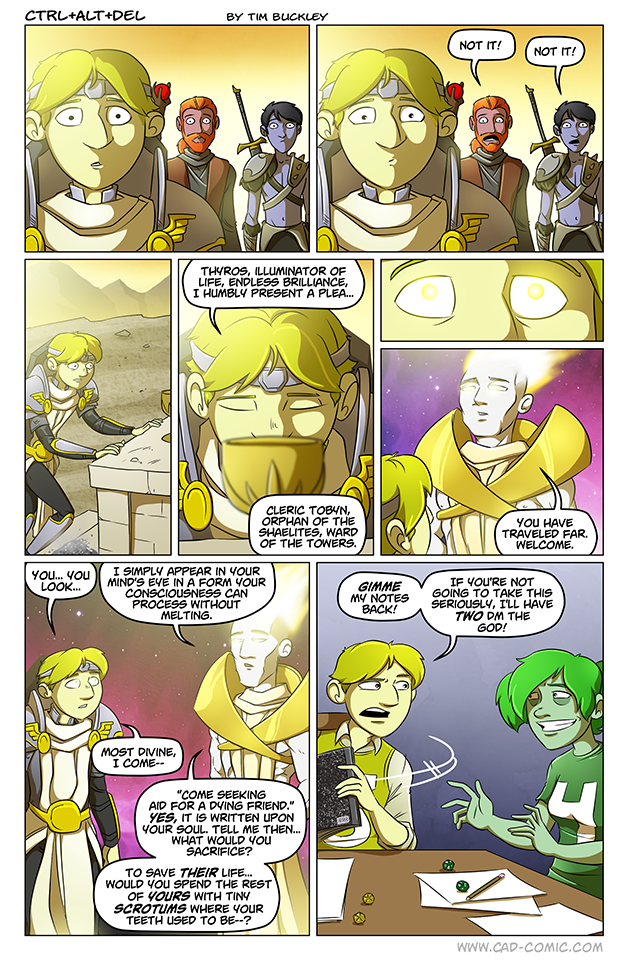 The Campaign: Against The Clock

Ever wanted to play a card game where any of the first 44 Presidents of the United States could beat the shit out of Trump? Well, you’re in luck!

Last year I worked with Killer Robot Games to produce a Ctrl+Alt+Del-themed version of their card battling game Legendary Showdown. It was a fun project, and when they approached me to work on the art for their next game, it sounded like an interesting challenge; definitely outside my regular wheelhouse.

Nearly a hundred cards of new, original art later, Legendary Showdown: Presidential Edition is now available for backing on Kickstarter! It can be played by itself, or combined with any previous iterations of Legendary Showdown (in case you wanted to see if Chef Brian or Abraham Lincoln would win in a fight!)

Hmmm…interesting scenario our DM set for himself here. He wrote the scenario, he wrote the path getting to the challenge yet one of the players will be setting the benchmark for that challenge. I guess it’s something that has to be done for player DMs. Although I’m surprised 4 used Thyros to troll 3 instead of going something “Oh her? Yeah she’s perfectly fine now! Also I gave her 20 extra levels and her own kingdom just for being awesome!”

She chose the funny not OP route for that I respect her! lol

Bet you any money that’s just coz 4 didn’t think of it.

I find it weird that a god of love, healing, and light would outright incinerate people asking for help. Even Sarenrae wouldn’t do that, and she’s a warrior fire goddess of the sun.

We only picked up Strudel’s conversation with Thyros midstream, and only one side of it–we don’t even know if healing Cake is what he was asking for. Based on 4’s personality and the “What’s the point of being a god, then” comment, I wouldn’t be surprised if she insulted/disrespected him in some way that merited said incineration.

You’ve evidently never had the problem of what to do with a temp character after they’ve outlived their usefulness.

Thyros doesn’t incinerate anyone for asking for help. He incinerates them if they fail the test of will/faith (that they agree to).

If it was no big deal to just approach a god directly for help, people would be lined across the whole mountain range up to ask him to solve every little problem/inconvenience.

And placing the altar on the highest mountain surrounded by extremely dangerous monsters doesn’t prevent casual requests? This isn’t some kind of deadly trap or something. The god literally murders the follower, even if they underwent this test for completely selfless reasons. That’s seriously screwed up for a LG god of love, healing, and light to do.

Don’t take this as a criticism against you. I’m going into this story assuming that Three isn’t the best GM at times.

Think of it like a multi stage filter. The first stage, the monsters and location, filters out those that have no business even making the attempt. If you cant find your way past such mundane issues you are clearly not worthy of even making the attempt to be found worthy. Second stage of the filter is the cup/challenge. The riffraf has been weeded out and anybody that gets this far are at least worthy enough for a bit of the god’s attention to administer the test. They can still fail but those that didnt even get this far are not… Read more »

TWO?
What am I missing here

Nevermind I’m stupid, Player two… I saw the bold caps and thought it was an acronym

Don’t feel bad. I was confused at first too.

My first thought was that it was a mistake and he meant to use “to.” “I’ll have to DM the god” but with it being all bold, I second-guessed that and thought it must be some kind of word-play pun I was missing the meaning of… It was only after that, that it occurred to me he meant Player Two.

Eh I feel like you are working a bit too hard to get a joke a page in this act. Four’s humor is best in small doses and it has been going on full blast the entire arc. I like the D&D arcs but might just want to balance it a bit more.

An RPG player
Reply to  Critic

Meh! I have played other RPGs where a player is pissed off at the GM who harmed/killed a previous avatar of the player and given a chance to snark the GM, it was full on like King Kong. Complete with asshat attitude towards the GM and gratuitous dice rolling thru many skill checks. The GM learned to not be an asshat to the players.

Nope, it’s just right. Personally I need a joke a page or I am going to lose interrest real fast. That is also why I skipped all of the Starcaster Chronicles stuff (which I am sure most find awesome, but bores me to tears).

Keep in mind that readers are not nescessarily comic fans. I abhor comic books and consider them a huge waste of time. But… I do love a good dose of cheesy humor and jokes. That is what keeps me coming back.

You’re not wrong, but that humor is a welcome counterpoint to the current campaign arc, which focuses on a GMPC’s personal quest while the actual PCs just watch.

Our GM recently had a a quest NPC make out with another NPC, in Elyssium, with our characters contractually obligated to be present. And it wasn’t even a quarter as awkward as this arc.

Sometimes there’s a fine line between NPC and DMPC, but not here. Notably, when these PCs try to interfere or even interact naturally, they’re punished. That’s the kind of GMing I’d expect from me, not a good GM.

Scrotum teeth is funny. Period. Yes, I spelled out period.

Anyone else feel like 4’s been getting progressively more crazy-eyed? I mean, those bags she’s got right now would be too big to qualify as carry-ons at this point.