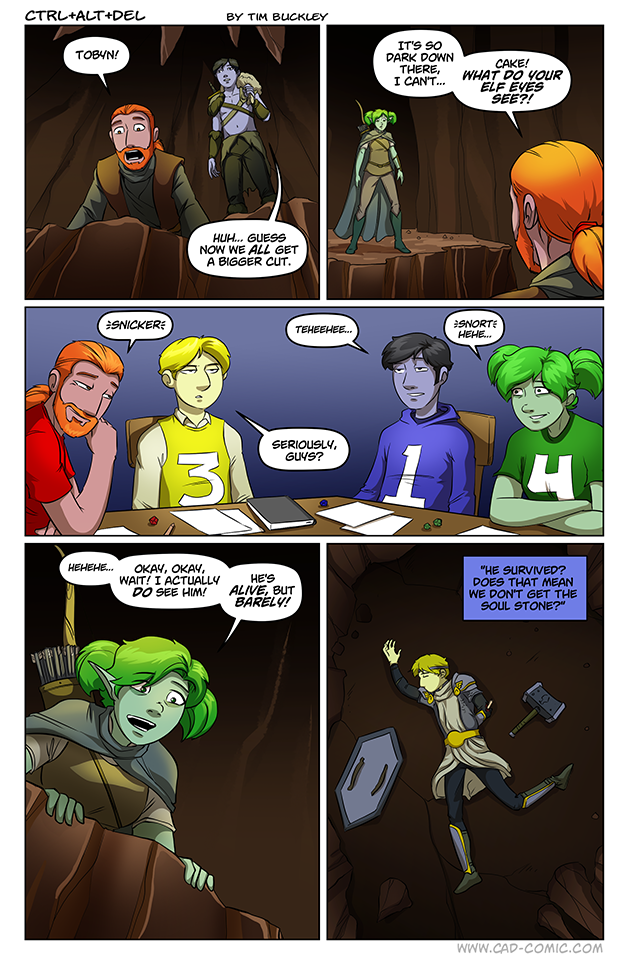 From Lord of the Rings of course. Curious if the Soul Stone is a diablo or such reference or if that actually a thing in DnD?

It’s a reference to “Avengers: Infinity War” and “Avengers: Endgame” where, to obtain the Soul Stone, you had to sacrifice something you loved by throwing it off the Cliffs of Vormir. In both movies, it meant that someone had to throw a person off the mountain to get the stone.

Ohh I didnt think about that one. Although I dont think this would have been good enough.

Carrying a dead player’s soulstone to a resurrection shrine was a mechanic in DDO long before MCU.

True, and I love you referencing it, but notice they put a space between the two words.

Diablo was my first thought too haha. I know it seemed random and didn’t really fit, but I mean, it was (presumably) Cake saying it. And Cake is a bit of a crazy person.

It’s a pretty narm-y line from the “Lord of the Rings” movies. “The Two Towers,” specifically. In the movie, it had not yet been established that Elves had far superior vision to Humans, and thus Legolas could see for miles. So they threw in the line when they’re tracking some Uruk-Hai who kidnapped the Hobbits, Aragorn asks, “Legolas, what do your Elf eyes see?” to tell the audience that, hey, this guy can see stuff REALLY far away. Except it came off as utterly stupid because, obviously, in real life, people don’t talk like that. You’d just ask the guy… Read more »

not only do they have better eyesight, for elves the world is flat so they don’t have to worry about the horizon. that’s also why only elves can sail to the undying lands, it isn’t on the spherical earth but is on the flat one (I’m oversimplifying a LOT)

I don’t remember that scene.
I think people don’t talk like that because we don’t have elves.
But thanks for explaining in detail.

It’s a reference to this scene from Lord of the Rings: The Two Towers
https://www.youtube.com/watch?v=GhBFpkY6GPU
It’s been an internet meme for over a decade now.

In D&D, elves, half elves and a few other races have ‘Darkvision’ which lets them see in the dark. Number 2 is asking Number 4 to use their darkvision by quoting the LotR meme.

I had zero knowledge of this joke or any memes regarding it; thank you for asking.

He’ll be fiiiine, they just need to wait for him to regain consciousness – he did get that divine healing spell earlier, right? And what’s some ability and/or brain damage to a cleric like him?
He’ll be fiiiine…

When someone thinks I’m a total nerd, I just point to things like these. Those of you that easily got both references. To prove I’m not.

Not as an evasion, I have nothing against nerds. I actually feel the average one is a pretty decent and smart fellow (unlike the average person). Just as a simple fact. I am a minor nerd, really.

I mean, lord of the rings and marvel are about as mainstream as a nerdy thing can possibly be. I imagine a great deal of people that wouldn’t identify as nerds would be able to identify these references.

I wouldn’t even count the Marvel movies as nerdy things at this point, honestly. They’re just some pretty good mainstream movies that were *based* off of a nerdy thing.

Agreed. MCU literally has the highest grossing film ever made, and LOTR is a cultural behemoth. Casually liking either is about as “nerdy” as liking video games. And recognizing a line from a movie or a pose from another isn’t the same as the “hyper obsession” that defines someone who’s a nerd on mainstream stuff, like a “Star Wars nerd” who can deliver lectures on, say, the economics of the post-Empire galaxy.

I am a HUGE Lord of the Rings nerd (books though – only seen the movies like 4-5 times)… and I didn’t catch it.

And for the third and final nerdism, In D&D 5e, falling damage is laughable. 1D6 per 10’ fall, to a maximum of 20D6. That cleric definitely survives.

Where has Three’s DM screen gone? He had one just 3 comics ago.

Pegasii
Reply to  A different Tim

it fell off the table

They’ve got an interesting play structure. In the past, when Three was acting as a player and not as a DM, DM power would shift to someone else. IIRC, when he was communing with his god to revive Cake, it was either One or Four who had the DM screen up.

I’m guessing these guys balance “DM” and “Player Character” by having specific rules for what rolls he does that are and aren’t seen. And they’re likely running of a premade module, rather than something that Three whips up in his head.

One to Four *whispered: ‘Bet your Fartseeker can finish the job.’

Um Ouch. I dont think his left foot is supposed to bend that way. Even the leg itself is in a highly uncomfortable to dislocated position depending on the angle of the torso. he’s not walking out of there under his own power unless he has a few spell slots to burn.