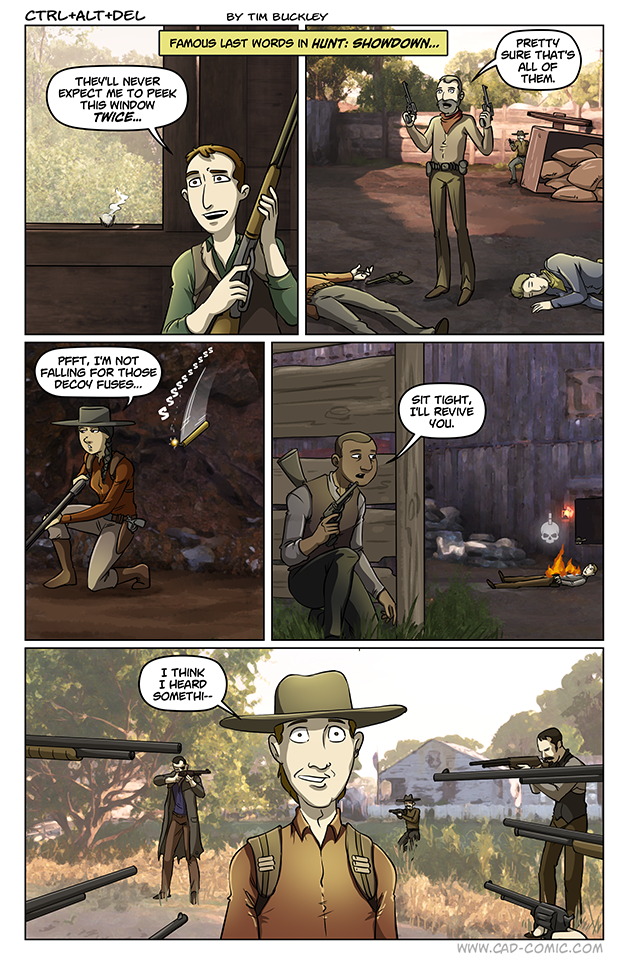 Some of you may remember a year ago I tried to get into Hunt: Showdown, but quickly realized the learning curve exceeded my available schedule at the time. Still, it remained a game that piqued my interest, and this summer I took the leap again, got into it, and powered through the trial-by-fire learning phase. Hunt has now become a game that dominates many of my evenings, it’s unique sometimes slow-and-tense, sometimes frantic-and-bloody take on the battle royale concept hits just right for me.

But wow, it is definitely a game where you come to view your hunters as dead men walking, for the sheer number of them you end up tossing into the meat grinder that is bounty hunt.

What keeps me coming back is that most of the time, if it was a good fight even losing is fun. Most guns will kill in 1-2 good shots, which means fights can go any which way the wind blows. I’ve taken out people with far better KDA than me, and way more hours in the game, and I’ve been shot in the face by people on their second game. Positioning and situational awareness are as much of a factor as who can pull the trigger fast enough, and the game’s heavy reliance on audio cues often mean your ears are more important than your eyes.

It’s a damned good time, and a unique flavor in a sea of shooters, and I’m glad I finally gave it to the attention it needed.

I wonder, how many hours per day do you spend gaming, on average, to be able to cover such a wide selection of games and genres.

About three, I guess? My gaming time tends to be between 10pm-12/1am ish. Certain days afford me a bit more here and there, but most of my gaming takes place after the family is in bed.

I’m absolutely in Love with this game as it never feels to amaze me and get me on my toes.
Plus the Soundtrack ist marvelous.

“I’ll throw this dynamite through this gap.”

That was the worst throw ever…of all time….

I’m glad yer enjoying it, Tim. Now if only I could catch you on a stream of it to take you up on your offer of Trios. =P

Wait until you play Naraka Bladepoint. That is an emotional rollercoaster. But I will say that Pokemon Unite is fastest way to break your spirit if you ever need it.

Guys, English is not my native, could you, please, explain one thing to me.

“Peek this window” is correct. It is essentially the same thing a “peek through this window”. However, when saying “peek this window,” you are not using the word “peek” exactly as it would be used in the dictionary. Think of it like someone telling you to “hold that window” in the context of a FPS game. You are not going to literally hold onto the window, but instead understand that you are going to do the complex action of defending a window. But rather than be specific, the word “hold” is used as a slang for the generally understood action… Read more »

“peek through this window” is technically correct in proper English, but given the wide use of slang and shortened phrases in modern streetspeak, “peek this window” is more likely to be said.

I’m going to suggest you are correct with “peek through this window” or “peek out this window” which would both read better in English than what Tim wrote. I don’t know if Tim has this happen, but most of us, at times, write something and even revisit it on edit and still omit words. The reason for that is your brain, when processing things you have read, tends to read *what it knows you meant to write* vs. what you actually wrote. I learned in a writing class that when one wanted to do editing, one ought to put the… Read more »

As mentioned by others, this is, technically, incorrect. However, native english speakers often use the language in mutable ways.

In this case he’s using peek, the verb, as though it were an action one did to a window, as opposed to something one uses a window to do.

So yes, Tim is incorrect here, but in an authentic way, if that makes sense.

“Peek the window/hedge/fence/whatever” is a colloquialism used by players in Hunt: Showdown (whether it’s used in other games I can’t be certain) meaning you are about to stick your head out to see if you can see any enemy hunters. It is generally considered dangerous to peek the same spot twice, because if you were seen peeking the first time, enemy hunters have their sights trained on the spot they saw you.

So therefore it is correct in this context.

As far as I’m aware its fairly common in many FPS games that rely on shooting from cover to survive. Hear it alot in PubG and other similar games.

Yeah, its just turning “Take a peek through” into its own single word verb for the sake of shortening callouts, mostly likely.

Have you tried playing Escape from Tarkov? It’s used there too, and it’s alot like Hunt: Showdown but much more modern.

From my experience in playing on a paintball team (and some time in the infantry), when you were moving through thick bush or even intermittent bush with a lot of shrubs, ears were *very* much more useful. The sad trade off is that firearms are loud. Fire one and your hearing is shot for a bit and likely damaged a bit if you keep doing that. But if you put in plugs, you lose a lot of SA. The other thing that makes a huge difference in the real world is movement. Just as one anecdote, I was crawling across… Read more »