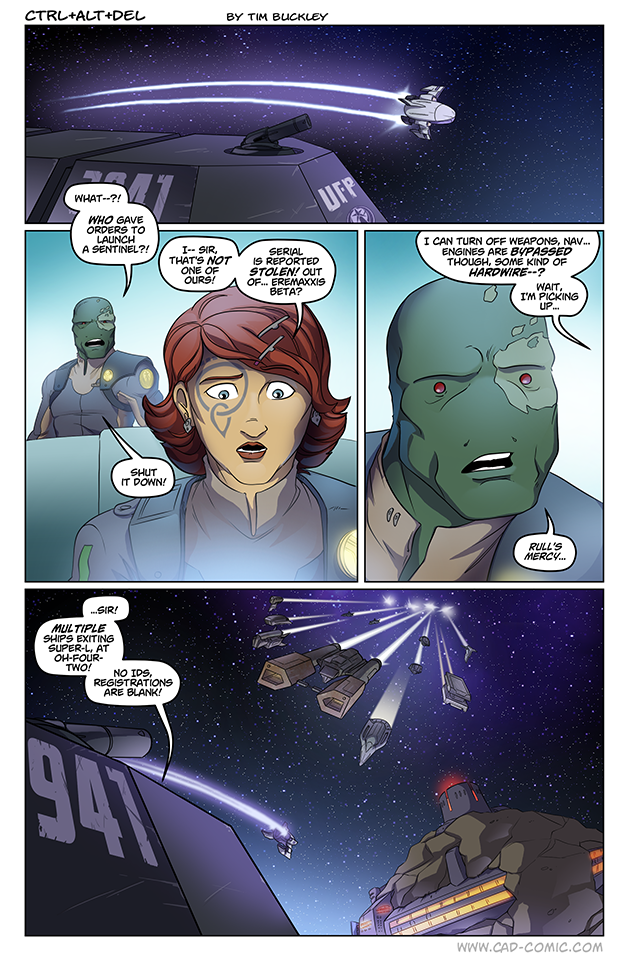 And there are the criminals, coming in with a fleet

They don’t look uniform enough to be an enemy empire, just my meta guess though.

Anyone gets a feeling the Feddies are the last ones we need to think about when voting?

We got the Space Mafia on our asses, the Empire, a Bounty Hunter who REALLY hates Cort and ofc the Feds who don’t care HOW they get the Starcaster on Cort’s arm as long as they get it. You think we can keep track of them all at all times when making our decisions? Cort should do a sex-change, maybe that gets some of his pursuers of his track. XD

If he’s very VERY careful, he could use the Starcaster to do it!

Again, probably why Tim didn’t show this page until after we voted.

well we would be operating on the same amount of information that Cort has at the time, so that makes sense

Did you want a fight? It is here now

On who? Against those odds, seppuku seems the best offense

Not sure how you’d persuade a fleet to do that, seems a bit tricky to get someone to go through with it

I read that initially as “wait, I’m fucking up” ….

This is the point Ulogg realizes speaking in the third person does not make him smart. Or even SOUND smart.

talky man talk too much

Boy, I sure am glad we made a distraction so we’re not standing there with our dick in our hand because we’re in Federation custody. Getting killed by The Grin is not on my to-do list.

I think the space battle that is about to unfold right before the space station would have been distraction enough for our purpose.^^;

Anyone else get the impression this was all going to happen anyway? That if we went straight to the ship, we’d be attacked in space by this fleet instead of on the station. I’d assume that some alternate scenario would also occur to split up the group, potentially killing one. Which is looking likely in this path.

I don’t think Tim would kill off Cort in any (current) scenario choice. I agree though, our choices decided if Cort was going to be in space or on the ship when these ships showed up.

I’m not thinking Cort, as you said Tim wouldn’t kill him off until the series was ending. Speck and Nyrah, however, are quite vulnerable.

Him.
Reply to  Tyros

Speck is reasonably immortal by normal means. His body is gelatinous, virtually anything he touches is dissolved, even if someone were to shoot at him or stab him with his species’s kryptonite (what his suit is made of) it probably wouldn’t be able to kill him- he can easily slice off lots of muck with relatively little pain or side effects. His only weaknesses are being hurled into space and being quaked to death (maybe) as well as the overly specific scenario of doom, but I doubt Tim would try to pull that off. Nyrah on the other hand is… Read more »

Eldest Gruff
Reply to  Him.

Where are you getting that Speck is gelatinous, or that Nivium is his kryptonite? Remember, he wants to own a -suit- of it. Speck’s never changed his shape at all and clearly has a bone structure. It seems far more likely that the ‘mimon muck’ that he scraped off is just an acidic coating that his skin secretes.

Besides, he had complained about the ‘scrapers’ when selling muck. That implies that he has something solid for them to scrape against.

You have a point about the muck possibly being just a secretment. I was assuming Speck is not one of the Aug races, giving him a bit more flexibility in crazy biological forms, such as being largely gelatinous. He does seem to have a skeletal structure though, so my apologies for being unclear- what I meant was more that the muck was akin to his skin and it seemed like scraping the muck off was harmless, it did not occur to me that he would probably need something to scrape off of. That said, Nivium is his “kryptonite” because its… Read more »

Tim
Reply to  Him.

I never got the impression that Speck is gelatinous, but rather that he secretes a fairly viscous and extremely corrosive mucous or something to that effect. Naturally he’s immune to it, but it happens to be a substance that will eat through pretty much any other substance. He’s not truly invulnerable, but he’s not susceptible to conventional ballistic weapons because his secretions will dissolve them before they can transfer kinetic energy enough to do real damage.

This is the reason why i voted for the distraction knowing that the merc knew his current location and marko was sending everyone to the same location. if the feds lost cort’s position for a little bit, then he has a higher chance of escaping alive from all sides.

Same, I am still expecting the Merc vs Cort without having the Feds shooting everyone regardless as the main outcome of the diversion.

the one problem being that we also ended up killing the external sheilds of the station in the process.
hope that doesn’t bit us in the ass too hard

That is one cool face tattoo.

This is kind of a bad time for the station to be without shields, which the “distraction” knocked out….

I seriously doubt they have any issues firing on the station, neutral or not.

You know, that earlier option Cort discussed about maybe Starcasting the space station and seeing how long we could survive is suddenly looking reeeeeeeal good. On the other hand…..secondary distraction, yay?

What surprises me is that this is (apparently) the Mob & the Merc showing up, rather than the Dranglaex and their fleet. How long will Kelias and Vectanix let M&M mess up before they take matters in their own hands? Getting this starcaster after all seems a bit more important than wiping out planets with just an ordinary fleet….

Given how they’re less conversation went, I’m not sure getting it back is the biggest issue for them. Yeah, it’s something they were looking for for a long time and something they really wanted, but since they have a huge fleet now, they don’t need it anywhere near as bad as they once did, so they might just be willing to lose that rook/knight and focus on the big picture rather than waste time and forces trying to get it back.

That bearing in the last panel looks like it could be accurate if it were the second set of numbers. I’d accept that to be a 42-degree inclination from the ship’s dead-ahead.

Hm. Hard to say if those ships are manned or not. I suspect not, that they’re all like the first one and just have their engines hardwired to a path and they’re just kamikaze units, but could be just the first one was and now they’re following up with an actual strike force. Given that sounds like it’s the ship the Grin stole when he was escaping that Fed outpost I suspect it’s just him though with a bunch of suicide ships.

The Legacy
Reply to  Darkening

Oh, I’m CERTAIN that its our infamous Merc friend; in one of the very first panels of this arc, he literally stated to Marko that he wasn’t going to look for Cort, but follow those who NEED to find Cort. His stolen federation fighter gave him direct intel on his whereabouts, and his appearance there, and I’m sure than Marko was notified, and had a fleet of his own staged, as soon as the merc knew. Needless to say, Marko is going all in here; win, and he MIGHT be forgiven by the Dragalax. Lose, he becomes enemies of both… Read more »

Oh great, this fed commander just gave the order for weapons hot vs Cort and now he’s going to be taken out by the bad guys. So now Cort has to deal with fire from the “good” guys and the bad guys. To top it off, if this commander guy is killed he won’t have to answer for his bone headed disregard for direct orders.

Makes me think of the scene in Serenity where the Federation dude yells “SOMEBODY FIRE!”

Two Firefly references on one page? Shinest day EVER!

I am very curious what the flying iPhone in a docking station’s offensive capabilities will be.

I am wondering if this is the Mafia or the Dranglaax, the Merc didn’t tell the Mafia where he was going and they didn’t seem capable of finding out on their own, while the Dranglaax might.

Looking back at it I am even more sure this is the Dranglaax and the Merc. https://cad-comic.com/comic/the-starcaster-chronicles-06-10/ In the conversation he didn’t tell them where Cort was likely to be and his “boss” seemed to have no clue on his own but was pretty sure the Dranglaax would know where they were. Which means I am pretty sure we are dealing with the Merc who will likely do whatever he can to make sure he gets to kill Cort (even if that means killing some Dranglaax that interfere with that plan, the Feds who will soon have their hands full… Read more »

Also look at the conversations from 06-02 and 06-10. These ships are most probably Marko’s soldiers. The Merc didn’t directly state, but heavily implied that he knew where to find Cort and was going to share that intel with Marko.

calling it now before vote comes in. Speck stayed behind and will be lost from story now!
it reeks of cliché.