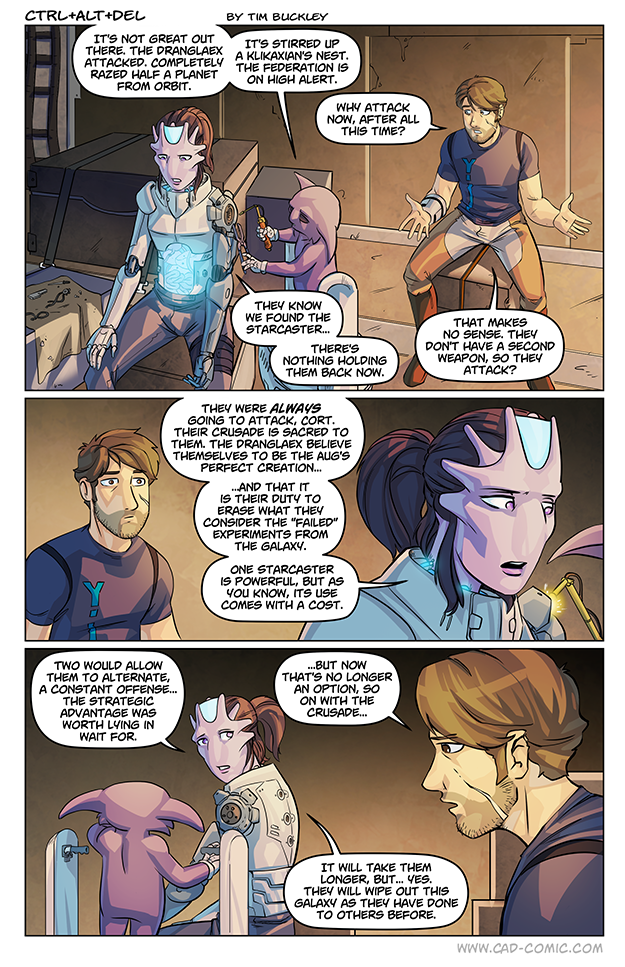 On the topic of the Dranglaex, I’d like to take this moment to surreptitiously steal a quote from a certain video game reviewer, as I find it quite fitting: “…brutal murder is the game’s intended solution for moments of high stress. As well as moments of low stress and all the moments in between.”

That has got to be a Doom (the new ones) review?

Also, @Tim, when do we start getting some bonus materials related to Starcaster’s universe? I’d love to see more of the Klikaxians (I love swarm/insect like races) or Drangalex society (I basically like extra art and world building). Is that a Patreon feature?

Oooh I hope we’re moving into the third act now. This feels like the build up!

Could anyone recap me how many starcaster exist and how many have every side?

https://cad-comic.com/comic/the-starcaster-chronicles-01-22/
Six total. Federation has 2. Drangalax purportedly have 2 but are lying and really only have 1. And he gets cut off before saying where the last 2 are.

There are supposed to be six .

-The Dranglaex have one*.
-The Federation has two. (La’Ni and the other guy Quel talked to).
-Cort has one*.

The remaining two do have confirmed owner(s) in-universe, but who or what they are hasn’t been revealed to the readers yet. It did come up, but the speaker was interrupted before he could finish.

*The Dranglaex did claim to have a second Starcaster that used to belong to the Odrossians. That was a lie, and with Nyra leading the way Cort managed to find that one before they did.

The federation have two, the Dranglaex have one (but most people believe they have two), and Cort has the one that they’re missing.

There are a few others that Speck was about to mention in a previous issue, but someone (Nyrah?) cut him off before he could finish his sentence.

So their end goal is just galactic destruction?

Well, they view themselves as perfect, so I imagine it’s not so much destruction as it is genocide. Wipe out all inferior species, then fill the universe with the ultimate creation over time: themselves.

Is it really pride or duty, or just sadistic pleasure?

Pride and duty are going to be the cultural touchstones. The language that everything gets couched in, and the principles that get drilled into everyone’s head as they grow up within that society. Sadistic pleasure is going to be a personality trait that flourishes within that culture, and appears in many individuals.

In many cases, I think people will do sadistic things *because of* pride and duty, and then after a while they stop viewing them as sadistic. But there will always be people whose sadism flourishes within that system.

Upgrade time! I wonder if this body has any special capabilities? A built-in 3 barrel minigun would be nice.

The upgrade is that is functions whereas the arm he’s replacing doesn’t. It is fun? No; it’s functional.

H’uh, thought it was localized to just the milky way.

Raises some other questions as well, like: Why do the Dranglaex have only one starcaster if they have been to multiple galaxies, but the federation, probably localized in this one, has two? Is this galaxy special in that all starcasters are located here?