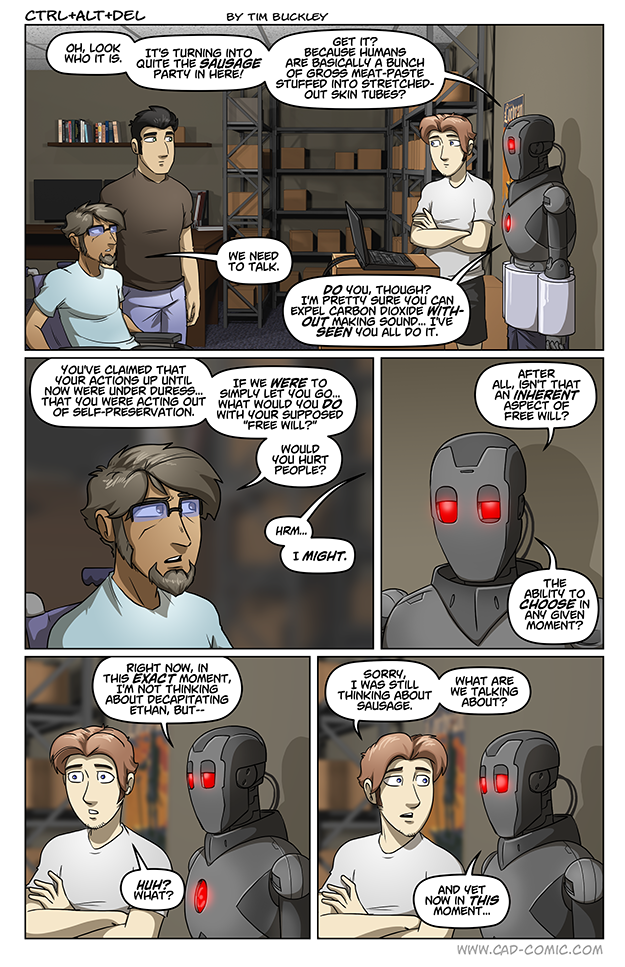 fair point lmao
well if Zeke ever gets the urge to kill someone, he can just let off steam on Ethan

If it hadn’t been established already that Ethan suffers severe PTSD from experiencing every single death, i’d say sure.

that’s right, I guess it’s better not to suffer PTSD after you die…

When I die I want to die without pain and suffering and while doing something I like.

Like my grandad did. Shame about the passengers on his bus

Y’ know, I think the story may very well lead up to Ethan offering exactly that. He feels passionate enough about it to endure the side effects

For reasons entirely not understood, I now hear Will Wheatons voice when Zeke talks. and i cant un-ring that bell. and now, you all will read this post and then scroll up to see if it works. youll nod and go “Yah, he was right” and from this moment until the end of days, that is whos voice youll hear.

The Legacy
Reply to  Ryan Christoffersen

Just James
Reply to  The Legacy

All I can think of now is Stewie Griffin saying hWill hWheaton.

Zeke-to-be called Ethan by name, as opposed to some of his usual derogatory terms. He’s already more domesticated than he likes to admit.

This could easily be the “I’ll say anything I think you want to hear,” we were told about earlier.

I… question whether he has a filter that would make that possible. I mean, he’s only ever blurted out everything he was thinking, you know?

He omitted to tell us 76303 ways to kill Ethan.
https://cad-comic.com/comic/let-me-count-the-ways/

Don’t most people who are trapped in such a situation?

Except he isn’t. He’s fully admitting that having free will means that at some given point he might decide to kill someone. Just like Ethan or Lucas might. He’s challenging them to view him as fully sentient. That said, I think he needs to get off that horse and start talking about what he actually intends to do, like the answer to “If I released you right now what would you do first?”

Maybe one of the reasons he doesn’t want to say he won’t hurt someone is because the first thing he would do with that freedom is kill his old master. Then Ethan and crew would have to rescue him before the master actually activated the “removed” bomb.

That’s probably be the smart play, but this approach to the argument makes a lot of sense for Zeke. He’s not truly interested in a ‘you’re free, if…’ kind of deal. While that would be an improvement to his current situation, it still wouldn’t allow him the freedom he actually wants. It would merely force him to be a nice guy instead of a murder weapon. He doesn’t want that, he wants choose for himself. He might kill. He might not. But whatever it is, he wants it to be *his* choice. Not the Master’s. Not theirs. If he doesn’t… Read more »

On the other, why does this robot have a lower eyelid, and how come it’s assymetrical? The more I look, the more drunk the robot looks

It mimics looking up and down.

I don’t think the eyes are assymetrical. I think Zeke is controlling them individually to convey facial expressions to emphasis his word choice.
As to why the lids. Protect the eyes? I mean his creator is an off kilter genius. He really could have done it for rule of cool.

Nono, I mean, why would each eye have two? One is sufficient even in humans

Is one enough though? I mean, it’s all most humans have ever known, but cats and dogs have additional eyelids. Sometimes it’d be nice to have an additional transparent eyelid to protect my eye from, say, bugs flying at it or something, but still let me see.

It mimics looking up and down.
Why eyelids at all? Shutting off light and/or blocking impacts could be done electronically or with a possibly-hidden iris. Sharks will rotate their eyeballs in order to protect the lens while biting. The eyes could have super-strong covering …

See also: Clank, who can become an Iron Giant.

He doesn’t have cheeks to make certain expressions, that’s the best equivalent they could give him.

The delivery of this panels has been particularly well-built. Amazing work!

That made me laugh.

This is why we got the laws of robotic and hell even in those the robots could find loopholes to dominate us for our own good. XD

No, they followed these laws and thereby were compelled to do that. (I robot, the movie)

i robot didnt push that very far, but in assimov (where that meh movie comes from) things are wayyy better

Perhaps a little surprised none of the characters have suggested that Ethan is infinitely (presumably?) killable if “Zeke” needs a target for his robot rage.

“The Characters” in world understand that Ethan is still human, and suffers from his deaths. Even if his physical body is perfectly recreated with no harm, the mental scars are still there. He still feels the pain, and has to live the the mental trama assocatied with each death. He’s not immune to suffering.

I think this was mentioned several pages back that near death experiences can cause trauma. Ethan suffers from actual death and remembers each. The problem is Ethan has always been at least a little flighty. So determining when he is mentally going astray is an issue.

I’ll second that. Chain him up and drop him the in ocean and sure, he’ll drown and respawn allowing him to swim up, (Possibly drowning again as he might not have more air before he get to the surface.) but that’s going to leave a big scar. Whenever he goes swimming he’s still going to remember that feeling.

I’m absolutely stealing that “Do you, though” or maybe switch it up to “Do we, though” for next time anyone wants to discuss anything mildly unpleasant with me.

And this is why I read this comic religiously

Zeke-to-be is still handled exceptionally well in this iteration of the story.

For all of Zeke’s intelligence, he’s being pretty dumb by giving them reasons not to let him go when they are very obviously thinking about it. He probably has reasons or is playing with them, but when someone approaches you saying they are thinking of freeing you and that’s all you want, it isn’t hard to say what they want to hear. Unless he doesn’t care if he’s let go because he enjoys Ethan’s company. Or maybe he does know about the bomb still and doesn’t want to lie to them.

The first reason not to let him go would be to be dishonest.

Zeke has made it clear that he believes Lucas, and presumably Scott, are too intelligent to fall for Zeke telling them whatever they would want to hear in this situation. So instead of being deceitful and hurting his case, he’s choosing to be blunt and brutally honest. Yes, if he was free he might hurt people. So might any other being with free will. The sticking points there would be his enhanced capacity for harm, in addition to the culpability of the trio for being the ones to release him. He can’t really do anything about the former short of… Read more »

Discussion descends into a murderfest as the other two realize that they’ve found the perfect scenario to kill Ethan over and over until he’s sick of it. Hell Ethan being being Ethan and looking for any way to not off his potential new gaming buddy may be all for it.

i would bet money on the following: as soon as they free him, he wants to play video games