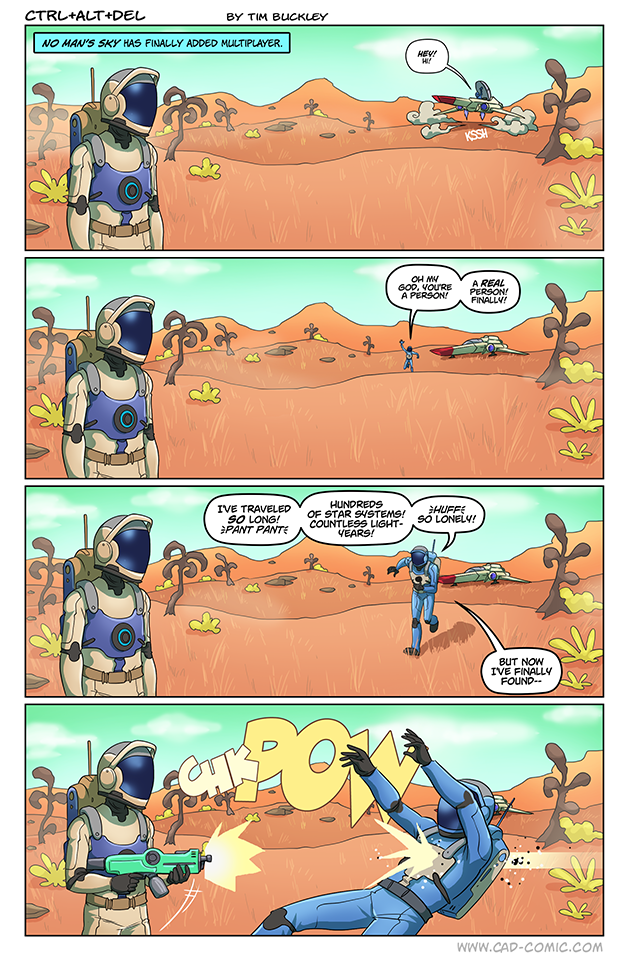 What You Ask For

Well, they finally added proper, official multiplayer to No Man’s Sky (along with a whole bunch of other stuff).

Say what you will about the development leading up to the game, or its launch, but I have to give them a lot of credit for continuing to support this game, add features and ultimately (as of this last update)  really turn it into a game resembling the one we all hoped it would be. It’s no small feat to take a game that launched as disastrously as No Man’s Sky, and turn it around so completely as what we have with NMS Next.

I know they’ve been updating this game here and there since it launched, but Next is the first that made me want to patch up my game and give it another try. I understand the argument that “they should have done all this before they released the game,” but at the same better late than never. Since I already own the game, it kind of feels like discovering a gem for free; like I backed it on Kickstarter and only just remembered about it. If I didn’t own it already, this update might be enough to push me to try it, especially at “the game has been out for two years” sale prices.

Multiplayer is not really one of the things that I ever really desperately wanted from No Man’s Sky… I think more than anything I just wanted to know it was possible, as I explored these giant planets and swaths of space. Well, now it is. I can venture out into that infinite void, and amidst the varied flora and fauna, possibly stumble across another intelligent lifeform… and immediately proceed to merc that fool.

heh, if it can bleed, it can die

This is why I’m feeling very unsure about investing in Fallout 76.
I’ve tried too many MMORTS’s (even after multiple repeats of the “never again”…. “surely this one will be better” mindset) that inevitably come down to which random asshat is going to wreck my stuff while I sleep/work/log on in just enough to watch and scream.
Multiplayer is fine for death play with no invested long term “stuff”, otherwise too much grief.

I would recommend watching the actual presentation in its fullest, including what Todd says. (Not meaning to be blunt, here, but thats a mindset ive heard multiple times) First, he says you dont connect to specific servers (im not quoting him exactly, from memory) but rather you just start the game and it matches you with people randomly. Think Sea of Thieves. Nothing you have is tied to a specific server, and therefore its highly unlikely your stuff is visible to other players when you’re offline. Second of all, its been pretty much confirmed that you save your base blueprints… Read more »

Yeah, I bet that happened a lot since the multiplayer was added. XD

Human nature right there!
Is it just me or are we missing a panel with the shooter looting the ship of his victim? 😀

“give them credit”? we gave them credit, near as I can figure we gave them 2 years worth of credit in the form of buying a full game and receiving 50% of it. and we didnt even charge them interest. now stop that before you wear a game dev cock shaped groove in your lower lip.

Oh knock it off with the edgelordy “negativity for negativity’s sake” bullshit. They delivered a game with some amazing tech, and hoped the gimmick of it would be enough to constitute a “game”. It wasn’t. I’m not excusing that just because I’m now giving them a little credit for taking their licks in the press, and then getting to work fundamentally transforming the game over the next two years. They could have just abandoned it and then everyone that bought it would actually be out the purchase price. Instead, those of us that were disappointed have now found it’s turned… Read more »

HEAR HEAR! Right there with you, Tim.

How do I upvote a comment? Because that was perfectly said.

Sadly, there is little to no chance that I will ever buy no man’s sky, because I refuse to support a developer that essentially scammed people for 2 years for a game that should have been finished upon release. if it were Early Access, it wouldn’t have been such a big deal, but it wasn’t, and it was both a Kickstarter AND a pull price game. I also won’t forget the head developer’s deceptive interviews and ads. I said there was a little chance, though; ìf it drops to $10 on Steam Sale… I may add it to my huge… Read more »

Ctown
Reply to  The Legacy

Well, given what so many other major gradually-monopolizing devs have done, are doing, and will continue to do, I guess you’re all but done gaming.

Out of all the game devs scamming you on a daily basis, you’re never gonna forgive the one who actually tried to make it right. It’s ok. Really. Everyone else can play this amazing thing that NMS has become and you can go keep playing Fortnite and paying them microtrannies all day. We won’t hold you up.

This, they at least managed fix the failure and finally deliver; devs that do that and not give up on shunned product asap deserve the credit, its devs that abandon product before its polished let alone feels finished should not be forgiven on other hand.

Noble One
Reply to  Tim

first impressions are still a thing, even with games.

Author
Tim
Reply to  Noble One

First impressions are valid, but if you don’t allow for your opinion to be reevaluated based on new information, then the problem lies with you.

Irritation/frustration/anger when a game is mismanaged or doesn’t live up to its potential is natural. But there is literally NO POINT in NOT wanting a game to succeed. We are all gamers here, and the more good games out there to choose from, the better for all of us. Double so if someone works very hard to turn a bad game around.

And the updates are ALL FREE.

Since I’m down for the next 10 days, I fired NMS up and have been engrossed in it. I think the Dev’s showed some real heart and it would be great if this pans out financially. Sends a message to developers that we will reward hard work.

I call this the Fortnite effect, where everyone is so used to Fortnite that they don’t know any other way to interact with other players

Naw it started ages before that. This is why I only ever play on private servers with my friends on games where building is a thing. The random people on public servers aren’t there to take a look at how cool my base is and maybe help, Most of them are there to break other peoples shit and ruin their day.

Actually, *most* of them aren’t. Most players are like you, and just want to enjoy themselves and maybe interact or whatever. But it only takes a very small portion of the population to ruin it. When you have even just 5% of players griefing, it makes the remaining 95% constantly play on their guard – they start to assume that every player coming into their space is going to be a griefer, so they get on the defensive. It’s the same thing that’s made Sea of Thieves drop off so quickly. Every time I see a ship on the horizon… Read more »

It’s the old “shoot first, ask questions later” type mentality that can ruin these games. Only way to avoid it is to find 3rd party servers that enforce a more punishing ruleset for people who act that way if the game supports it.

This is 99% of The Division right now. Can’t farm the Dark Zone because you’ll get mobbed by eight assholes that don’t even need the gear you have, they just want to kill you to make you miserable.

Well since it seems our base building has been reworked to rip off fortnite/rust, I can see how you might forget which game you’re in while you’re building and some rando starts running toward you

You should play from the start with friends.

I don’t know if you can for this game

You totally can! If you decide to join a game of a player who’s just starting, you can do so with your own New Game and your ships will be found sitting right next to each other.

Why do I have the sinking feeling that you’ve just depicted humanity’s early attempts to colonize Mars?

Turns out they 297 THOUSAND images parodying your comic Tim. We have problems.

They certainly have improved No Man’s Sky a lot. Although unfortunately just because it’s now a better game does not mean it is now a good game. Because despite what everyone else has been saying. It’s still bad. Very very bad. If you want a space game with procedurally generation and a reason to explore planets, get Starbound. If you want a space game where you go from planet to planet, trading, and improving, get Elite Dangerous. If on the other hand you want a game where you have to make a pit-stop every few minutes as you go from… Read more »

I always saw NMS as a sort of looking at planets for the sake of looking at planets. Like the purpose is exploring the planets because they are there, not only because you need resources or because you want to make a dedicated drilling outpost or whatever. Simply because they are there. And just because it isn’t the best of its class doesn’t mean its great. Just because X is outstanding doesn’t mean that Y can’t be fun. If most people only played the absolute best of a series or of a genre, we probably wouldn’t have 15 Final Fantasies,… Read more »

XD! I first bought No Man’s Sky after the Foundation Update, on Steam. I actually really liked it. But after a month or so, I got tired of it and uninstalled. But with the NEXT update, I’ll never tire! This game was an achievement from the start, even if it didn’t live up to the hype.