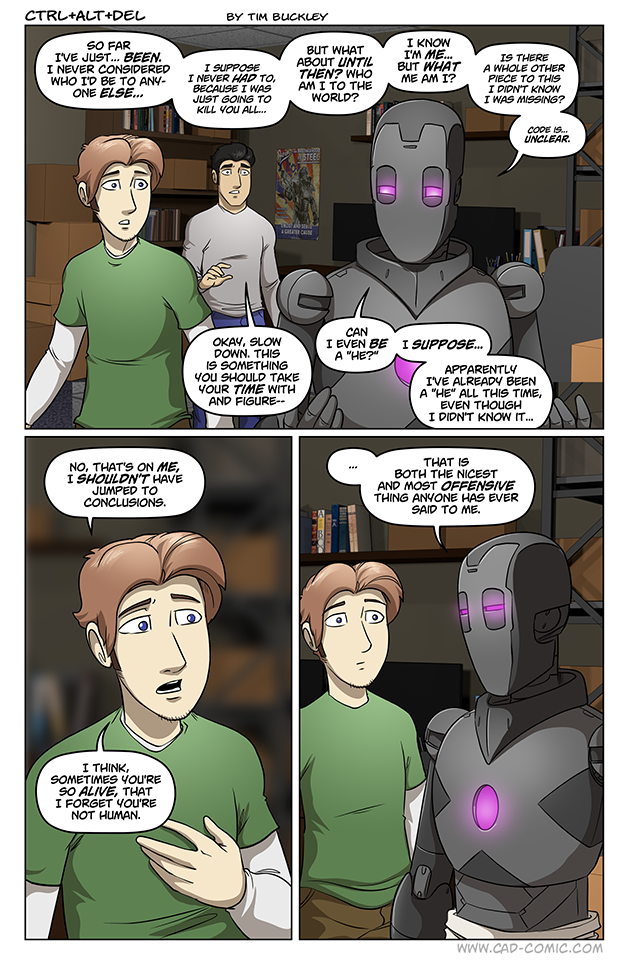 And yet, Ethan raises a good point with that seemingly offhanded comment: his human concept of identity is not necessarily what is suitable or appropriate for a robot; a robot may have an entirely different idea of what it means to be an individual. While not necessarily 100% applicable here, this exchange makes me recall one of Legion’s quotes from his loyalty mission in Mass Effect 2: “All must be judged on their own merits. Treating every species like one’s own is racist–even benign anthropomorphism.”

Gender is a role. Sex is anatomy. Traits of sexes have shaped our views and expectations of genders. The male sex usually has a deeper voice as a result of males typically being larger than females for instance. So we associate deeper voices with masculinity as a social norm.

Does Zeke have a plug or a port, or both might be a question worth answering.

On a strictly mechanical standpoint, he’s likely neither – I doubt that his creator gave him the ability to reproduce at all, male or female. So in this case, it’s *just* societal role. But even less than that – because the X1’s not really part of a society. No one expects him to be either stereotypically male or female. Quite literally, this is one situation in which it’s really just a linguistic thing – he needs to pick a pronoun. But he’s not taking it like a mechanical being; he’s considering it, like a biological one. Which is another little… Read more »

I think X1 has totally the ability to reproduce. He can build an offspring, given the right resources and tools!!

That’s true, but also plays into my point: presumably the robot doesn’t possess anything analogous to genitalia, so we can rule out sex. At the same time, while gender is a social construct, it’s a human social construct. As such I don’t think not-Zeke would necessarily ascribe to such a notion.

If we look at design, Zeke has the anatomical build of a human male. And while we can not hear his voice, Ethan’s assumption might also have come from the pitch of it. Like whether or not it is an Alexa or a Hawking style text to speech.

It is an interesting concept because Zeke is not like the Androids in Detroit Become Human.

already got balls of steel
I mean, ball bearings…

Now don’t give him ideas!

Geez people, I was being fascicious

Yeah, I think that’s why you got downvoted. People today can’t take a joke about PC culture

Actually steel is non-toxic, as is the water-based lubricant in which they roll.

I’m confused. I always hated this whole gender identity thing… but I am really liking this storyline! I think Zeke should go with Murderbotbuddy(M/F) on this one.

Yeah, this gender thing that keeps croping up everywhere seems really out of place most of the time. But regarding identy for an AI its actually really interesting.

It started with pronouns, but Zeke already stepped beyond that immediately. Up intil now, he was just a captured murderbot, which developed a liking to games and decided not to kill everybody right away.

His AI is now stepping to the point of actually defining themselves as a personality / person. That’s beyond gender, which is somewhat irrelevant to a robot anyway. Perhaps Zeke will develop a personal preference, or perhaps they just won’t care. It’s up in the air right now.

With Zeke, all our pronouns will be was/were.

No reason to be confused. Sex is parts you were born with. Gender is about your nature. Presentation is how you present your gender to others. Orientation is who you are attracted to. They are all different and although most people adhere to a particular typeset, they do not have to conform to a particular rule. To a non biological entity like Zeke many of these roles are probably confusing or may not apply at all. I’m looking forward to where it leads too!

Well, no reason to be confused when explained THIS concisely and clearly!

So, if anyone doesn’t understand, this to be reference to an amazing series of novellas of a robot/cyborg entity called Murderbot, that doesn’t do either gender.

Just some feedback on the zoom thing regarding the ads: The problem with the ads covering the page seems more or less resolved (on Chrome browser, current build, 150% zoom) but now the comic is getting pushed to the right and almost off the screen because of the left border/page width. (I think). It initially loads properly, then everything shifts to the right. That wouldn’t be much of an issue, except there’s no scroll bar at the bottom to scroll over and see any parts you’re missing. On archive issues I’m sure it’ll cut off the right hand NEXT button.… Read more »

That’s what I’m running . Now 10 hours later the earlier problem seems to be gone, so maybe something was changed on the site in the meantime? I’m not sure. Everything looks fine now though.

I am using uBlock Origin, also no problems with ads pushing the comic out of the screen.

I’m on the current build of Chrome and I can’t reproduce this issue by zooming in.

Yaay, I’m happy for the gender identitety part! Brings more depth to story and character. No matter what conclusion Zeke comes to, it’s great to see the presentation of said issue more. This comes from a genderfluid being. :3 Thank you Tim! <3

Are we sure Scott was ever really evil? At most he was an antagonist of Ethan’s and perhaps misguided before the reset. Here he seems a friend and his fears are those many people have. I personally think those fears are wrong. But that does not make them illegitimate nor make the person evil. I am afraid of spiders. That fear in itself does not make me evil. And Scott has not tried to directly destroy/kill Zeke. He has hidden safe guards for if the machine built to murder people goes rogue. But he is waiting for proof of intent.… Read more »

What level of intoxication coded his brain?

This is getting rather interesting. Many of the things Zeke’s wondering are usually chosen for us, at least at the beginning, but Zeke’s on a blank state. I really hope we don’t have Scott going antagonist on the group, I liked him on hios past incarnation and I like him on this.

I think Rick & Morty covered this issue quite well when they described Unity the collective Hive Mind as an “it” rather than a he or she. I think It is a fine descriptive term for a robot as well, albeit confusing but still works.

Unless the movie IT completely ruined that too. Haven’t even seen the second film yet.

Problem is, we use ‘he’ and ‘she’ to describe persons, and ‘it’ to describe things. “It” dehumanizes the individual. It is correct English to use ‘they’ as singular (example: “If someone walks through that door, they’ll trigger my booby trap”) but that often tends to be even more confusing, especially when more than one person is involved.

I agree but 1) X1 is not human. so.. does dehumanizing it really matter?
2) there are multiple works of fiction that has a bot calling itself “it”, so… there is precedent that makes sense. (for an example, look at Murderbot Diaries)

Him.
Reply to  Timmeh

“It” could be used, but it’d be more polite and respectful of X1 (Gizmo?)’s sentience to use “they”. “They” as a singular has precedent in plenty of works of literature; it just so happened to die out not too long ago before reemerging in much more recent years. I believe Chaucer used singular they, as did Shakespeare (though I may have that mixed up with someone else). For all intents and purposes, “they/them” are the terms used for non-binary people or for any given entity without gender. “It” signals non-sentience or objects. With Hive Mind constructs it depends, both “it”… Read more »

I’d worry that “It” isn’t just dehumanizing, it’s depersoning. We use genders for animals (usually defaulting to their sex, or they/them) and we do the same for aliens in fiction, even ones that don’t fit any human gender presentations. We even gender our gods in mythology, though often not 1:1… But artificial beings in fiction often get referred to as “it” instead. As if to remind us that they’re “just” objects, not true life-forms. That’s less likely when they display more personality, because it becomes harder to discount them. I think that’s interesting, and I would be wary of labeling… Read more »

I think Gizzy would be tickled pink to be dehumanized.

This page has probably the most interesting bit writing I’ve seen from you.

Did I say something wrong? I just really liked this conversation between Ethan, Lucas and Zeke. The question of “can a synthetic can be a person” is one I’ve read plenty of times, and I really like how Tim phrased it here. Did people downvote me because I phrased like an insult, or a backhanded compliment?

Regardless of how anyone else received it, thank you for the compliment. I spent a lot of time researching and writing this storyline, and I it’s nice to hear that people are as interested in seeing the robot develop as I am.

I’m going through the comments of this particular page and constantly shaking my head in disapprobation at the people forcing Meatbag Gender Studies onto an AI. Not-Zeke is the first of his species, let the Bot decide on his own without politicized Meatbag viewpoints colliding with each other in the comments section. We’re exploring NZ’s view of self, not our views of Biology VS Psycology. For this context, it’s off topic and liable to explode in ways the posters are not intending.

This is absolutely not the place I expected a relatively nuanced discussion about identity and gender specifically. I’ll be blunt, this is showing some real fucking growth as a creator and I am genuinely impressed. Good shit, man! 🙂

To be honest, I just really like the fact that during such a sensitive topic you can drop in such a great line to make me laugh without ruining the scene

This is one of those things where it’d be neat to hear his voice. I like to insert the sword’s voice from Transistor for Zeke. In that case, ‘he’ is a logical leap. Who did the Master model the voice after? Did he use his own voice? Did he just do a Siri type voice? Is it that British robo-voice all the YouTube accounts that recycle reddit content use?