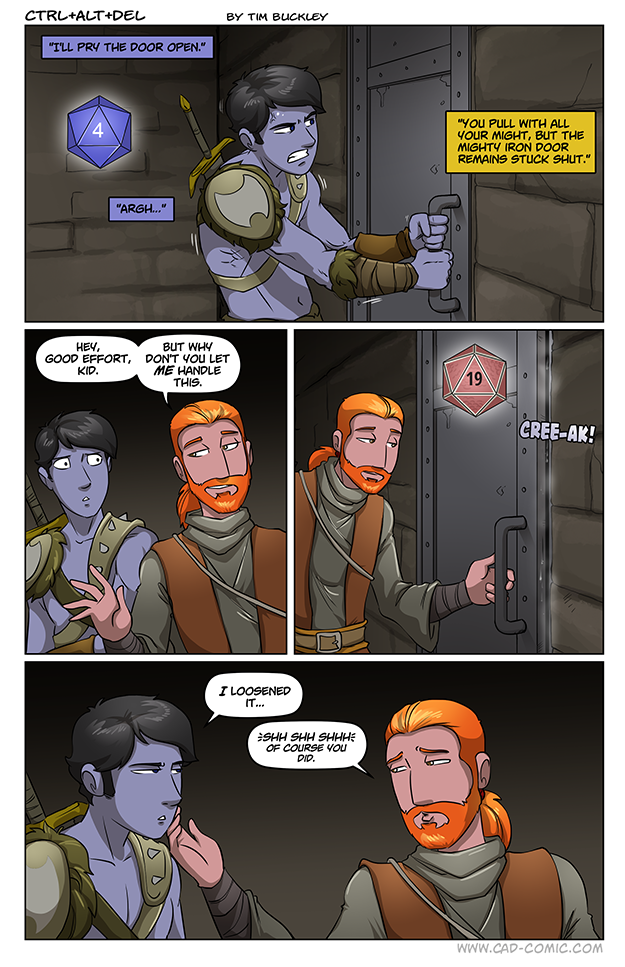 When you think about it, the 19 is already scarily close to the 1. We’re getting closer!

Or the barbarian/his player getting angry because of his attitude (I think I would) and doing something to either the dice or the wizard/his player.

Ok, probably not, but Red/Two is being a jerk right now and I wanted to vent about that a little. 😛

You forgot WITH the dice TO the player.
But that doesn’t stop him still rolling a 20 Thai/ping pong ball style.

They’re referred to as B.O.B.’s now. You’ll need to watch the VLDL D&D channel on Youtube to see just how bad it gets sometimes…

Ah, yes, the team has finally encountered the most slow and insidious killer of them all – the mighty iron door.
The power of Flizwit, however, is unrivaled. Now there is but one legendary beast that could possibly challenge him – the gazebo…

If we’re thinking about the same story, unlike the (I think) paladin from it, he has access to fire magic, the worst weakness of the mighty gazebo.

You must face the gazebo alone….

Though after running into enough mimics I would also likely take a shot at a gazebo that had never before shown up.

We once spent a whole, 3 and a half hours session to open a single door.
Well, the door was on the other side of a room completely covered in corrosive slime, but that was the final recap.

A door that resists force applied and only opens with a gentle tug. Devious, truly devious.

Which Merlin? (I know about the Arthurian era wizard, but the name was reused more than one time since)

The frame is made of a newtonian material! xD

I wish some of my neighbours suddenly would get that type of doors.
And that they only close with a gentle tug/push too.

I’m going to guess that it’s going to end with the die failing a crucial roll that kills the character, and then the die being destroyed.

I don’t think it’ll get destroyed but it’ll always fail him in a crucial moment and I bet as a karmic payback, the others will get god rolls in exchange during those crucial moment.

The situation is getting dicey, but I’m sure Blue won’t just roll over and give up!

This actually happened in an old 2nd Ed Planescape game I was in, except it was even more unlikely because it used a d100. It was a Bend Bars/Lift Gates roll. The fighter, who is part angel and thus had a whopping 19 Strength, had a 50% chance of success, which he failed. Then along comes our mage, who had a 1% chance of success. And succeeded. I assume Tim is aware of this tale, because I depicted it in my own webcomic MANY years ago: http://planescapecomic.com/67.html (I kid… it’s a good joke, and I’m sure Tim has not seen… Read more »

The % rolls have always been a D&D meme. Even in the now old movie The Gamers, the strong barbarian keeps failing rolls that he should easily pass while others manage to pass despite the low chance.

D&D always had pretty wild swings, even just using a d20. If you think about it having 10(the starting level) vs a 20(the max with a racial bonus) is only a +5 difference.

Amateurs. Loot the door! That thing is Sturdy and will make for a good shield!

If it ain’t nailed down, loot it.

If it is nailed down, pry the nails off then loot it.

I did exactly that in a Shadowrun campaign just a few years back. It was a laundromat, and I used sheets to strap the door to my troll’s arm to use as a tower shield. Looked ridiculous and got a few laughs at the table, and it did manage to stop a few bullets due to amazing barrier rolls. It was more lucky than good, but sometimes that is all you need.

I once had a DM that put a mithril door in an adventure in Eberron. With level one PCs. For some reason, he was surprised when my rogue PC’s immediate reaction was to loot the door.

When brute force fails, isn’t this when you attempt to seduce the door?

If Brute force is not solving your problems it just means you did not use enough.

“Lift with the legs, my friend”

It would have been funny if it was a push door and not a pull door.

You remember how it seemed the dice had different faces? Is he swapping out his legit dice with loaded ones?

BUT WHEN WILL WE SEE THE MIGHTY MOUTH DICE?

Didn’t these characters start out with the concept of constantly killing each other? Been a while since any of that has happened, eh?

I’m not sure if you’ve noticed, but the format has somewhat changed since 2012

This is one area where D&D 5th Edition got it wrong. Character’s stats just aren’t important enough to the results of a roll.

It’s why I like how Pathfinder 2e did it.

Erm. This is just the comic making fun of the trope, but a 20 isn’t an automatic success in 5e either. You still need to surpass the difficulty of the check The Natural 20 rule tends to apply to combat where you automatically hit + have critical damage rolls A barbarian can roll low enough where even with their stats they don’t surpass a DC check of 15, but a wizard rolling above it can even despite not having the requisite base stats or skills. It’s just up to the DM to justify how that happened. Maybe Mr. Barbarian didn’t… Read more »

They’re not talking about 20’s being an automatic success. In older editions you could literally get over +20 or even +30 in skills, so if a strength DC was like 35 then only the strong characters would even have a chance. In 5e the highest bonus you can typically get is like +12, and that’s with max stats and Expertise.

Just waiting for either that eventual unlucky roll, or 3 to decide you need to roll low to succeed. There’s no way 2 gets through this without some kind of comeuppance.

He’s not a great GM. I’d have said “Instead of pulling, you decided to push and the door easily opens.”

Btw great dungeon door design, make random doors look like they should be pushed when they should be pulled and vise versa. When running from death, their brains won’t work well enough to remember some doors require the opposite of what you’d expect. >:)

One of the rules D&D never seems to have gotten to work intuitively. I usually just houserule that somebody with a lower strength bonus than the first person auto-fails.

Im calling it now. One of two things. This magic die will become one of the mouthdice or is a traitor dice. 2 is going to experience when a great die does exceptionally well in all but the most important rolls to make.